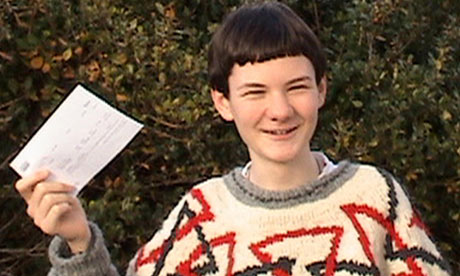 A 14-year-old maths prodigy is on the verge of breaking a 237-year-old record by becoming the youngest Cambridge University undergraduate since William Pitt the Younger.

Arran Fernandez, from Surrey, has been offered a conditional place at Fitzwilliam College after passing the university’s entrance exams.

The teenager, who has sat his maths and further maths A-levels, now needs only to pass physics A-level. “Maths has been my favourite subject for as long as I can remember,” said Arran, who was educated at home.

“I enjoy being home-schooled because I’m more involved. I can see the mark schemes and help my dad decide the curriculum.”

He first made headlines in 2001 when, aged five, he gained the highest grade in the foundation maths paper. He went on to sit the intermediate GCSE paper and gained A* in the advanced level paper in 2003. Arran who has n
ow decided he wants to be a research mathematician and says his ambition is to find a solution to the Riemann hypothesis – the unsolved theory about the patterns of prime numbers that has baffled mathematicians for 150 years.

Neil Fernandez, Arran’s father, believes his son could soon be the youngest Cambridge undergraduate since William Pitt the Younger began his studies there aged 14, in 1773. A spokesman for the university said he was not sure whether Pitt’s achievement had been bettered. In 1998, a child prodigy called Alexander Faludy came to close to matching Pitt by beginning his Cambridge undergraduate studies at the age of 15

This article can be downloaded as DOC or PDF version.

Iconic One Theme | Powered by Wordpress